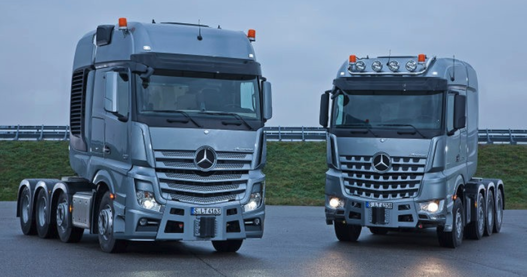 Look at that in isolation and it’s quite an achievement. But is it really necessary and is it that much more convenient? In reality, all it changed was that instead of getting off my butt and picking up a copy of the magazine, I reached into my pocket and tapped on my screen. Everything I wanted from the magazine was still there in front of me, for sure, but the experience itself was not as pleasurable as actually sitting down and turning the pages myself. I was still in control of what I read, but at the same time, I wasn’t in control of the magazine. I was in control of a bunch of microprocessors and other technological wizardry that was doing all the work for me.

It isn’t difficult to flip a page, just as it isn’t difficult to crank a window up or down, or shift a gear in a transmission, or to find a destination in an atlas, yet now to do any of those things all we have to do is push a button and a microprocessor does it all for us.

Trucks are going the same way. Get into the cab of a brand new model and there are no sticks and levers to be found, all you see are buttons and switches. Under the skin there are now kilometers of wiring and electronic control modules galore. The average truck now has more computing power than the space ship that took the man to the moon.
There are cars today that can park themselves. I’m not talking about top of the line BMW’s or similar either, you can get all this on a sub-€20,000 family car. Pretty soon this will filter down to trucks, cameras in the rear-view mirrors will be linked to motors in the steering gear and all you’ll have to do to hit the dock is touch an icon on a screen and the microprocessors will do the rest.

We already have automated manual transmissions that shift gears for us. They take information from a variety of sensors in the engine, transmission and suspension systems and come up with an ideal gear for the situation.
We have traction control, lane departure warning systems and adaptive cruise control that keep us a safe distance from the vehicle in front. Coming down the pike in the very near future is cruise control that is linked to GPS so that it knows when you’re approaching a grade and gets ready to apply more power or downshift.

My question is, do we actually need any of this? Or is it just being done because it can be done? Even going back to basics, do we really need a combination of switches and electronic motors to raise or lower a window when a simple winding handle and a few cogs will do the same job?

On the other hand, a steering wheel attendant needs help in every one of those areas. They need the truck to shift for them, they cannot judge speed, distance and road position, they rely on traction control to judge road conditions and apply brakes and cut the power so they can keep it out of the ditch. How can that possibly be considered as progress?

I can see a time in the near future when all the truck drivers have disappeared and been replaced by steering wheel attendants. The freight will still move and to the outside world, nothing will have changed – until there’s a malfunction in one of the systems and the steering wheel attendant doesn’t know how to react, because all the basic skills of keeping a truck on the road have been eroded due to years of having everything done for them by a computer – and there’s a catastrophe. It’s a scary thought.

Will technology replacing truck drivers with steering wheel attendants – epda
Hi, any bus/coach drivers in this group. Would love some advise for someone starting out as a bus/coach driver. Test coming up in a few weeks.

Will technology replacing truck drivers with steering wheel attendants – epda
No because the hours you work p/w are to long usually over 60 hrs and for the money that's on offer a person on average earns €10 p/h and because the hours are so long it leads to lots off problems including stress,quality of life and health

Will technology replacing truck drivers with steering wheel attendants – epda
I think that the job of HGV driver is a good one if its paid by the hour and the operator keeps within the working tine and drivers hours regulations. There are some very well paid driving jobs. Well paid jobs will always require specialist training such as car transport, chemical pumping etc. Employers are aware of the cost of training and retaining drivers and therefore will pay a higher rate than other employers. Own account operators to pay more that licenced haulage contractors. When selecting a company to work for it is always preferable to work for a company that have an experienced transport management who have actual hands on experience of the role of the driver within their own company. After 10 years of low wages the pendulum is swinging in favour of the driver. The Driver CPC and the increase in enforcement of drivers hours, tachograph and vehicle roadworthiness regulations are all benifiting the role of the professional driver.