Weekly rest period: Infringement costs up to € 1,700 in Italy – epda

Weekly rest period: Infringement costs up to € 1,700 in Italy 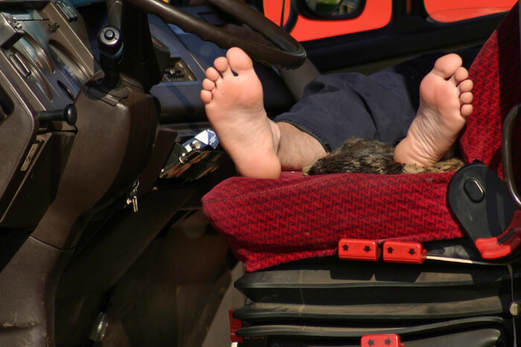 ​Only a separation of the driver’s cab and rest time can improve the working conditions for the drivers of logistics companies. This was confirmed by the European Court of Justice, which made it clear that the weekly rest period should not be spent in the cabin. Italy has now set penalties for infringement.

Weekly rest in the cabin is prohibited.

The fact that this applies EU-wide, however, had first to be determined by the European Court of Justice in December 2017 (we reported)  Therefore, it is a violation of the EU regulation to spend the weekly rest period in the truck. The reason for this is that working conditions for the driver can only be improved by having a separate resting place. As the case law is based on an EU regulation, the prohibition generally applies in all European countries. However, the regulation does not address the issue of sanctions, which each country must lay down in its national legislation.

Sanctions are determined by countries.

This hole in the sanctions is now to be closed in Italy, because so far it was practically possible for drivers, despite a ban, to spend their rest time in the cabin. It simply lacked the necessary sanctioning options so far. To remedy this, the Italian Ministry of the Interior published a circular on 30th April, after which the inspectors are finally given guidelines for the imposition of penalties. From now on, the offense should be treated as an unfinished break. In accordance with Article 174 (7) of the Italian Road Traffic Act, this constitutes a serious infringement of the rest periods. According to the fines foreseen in Italy this can be punished with a fine between € 425 and € 1.701.

This violations of the weekly rest period will be punished twice.

In the future, drivers and thus also the logistics companies will be double-sanctioned in Italy. In addition to the substantial fine, the drivers are also banned from driving on, as long as he has not performed the break properly. This can again lead to a considerable financial outlay and a considerable loss of time in the transport of goods.
The guidelines are still a guideline, but they should serve as a yardstick for the controllers. However, it will not be long before the guidelines are translated into law. Then the inspectors have to stick to the sanctions and can no longer make exceptions.

Weekly rest period: Infringement costs up to € 1,700 in Italy – epda
I really hope so

Weekly rest period: Infringement costs up to € 1,700 in Italy – epda
Hi, any bus/coach drivers in this group. Would love some advise for someone starting out as a bus/coach driver. Test coming up in a few weeks.

Weekly rest period: Infringement costs up to € 1,700 in Italy – epda
No because the hours you work p/w are to long usually over 60 hrs and for the money that's on offer a person on average earns €10 p/h and because the hours are so long it leads to lots off problems including stress,quality of life and health

Weekly rest period: Infringement costs up to € 1,700 in Italy – epda
I think that the job of HGV driver is a good one if its paid by the hour and the operator keeps within the working tine and drivers hours regulations. There are some very well paid driving jobs. Well paid jobs will always require specialist training such as car transport, chemical pumping etc. Employers are aware of the cost of training and retaining drivers and therefore will pay a higher rate than other employers. Own account operators to pay more that licenced haulage contractors. When selecting a company to work for it is always preferable to work for a company that have an experienced transport management who have actual hands on experience of the role of the driver within their own company. After 10 years of low wages the pendulum is swinging in favour of the driver. The Driver CPC and the increase in enforcement of drivers hours, tachograph and vehicle roadworthiness regulations are all benifiting the role of the professional driver.