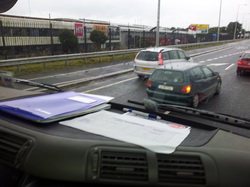 As professional drivers we come across situations that
are at times unbelievable. This section of the site captures on camera examples of where professionalism is nonexistent. While the pressures of the job can increase your levels of stress at no point should they ever reach a level where
your actions would in any way lead you to conduct yourself like those in the following clips.

The following video clip demonstrates how dangerous roads can be, or can become
if drivers do not use them correctly.The Royal Mail driver has completely lost his mind
and has not only  placed himself in great danger but has also placed other road users in
grave  danger too with his blatant dis-regard to the law and surrounding  circumstances.

Two people have been killed and ten others injured in a road
traffic accident in Russia’s Urals after a HGV rear ended four
vehicles. The driver responsible for the collision miraculously
escaped from his wrecked cab. The crash took place on a
highway outside the city of Chelyabinsk.The driver of the Volvo
careered onto the wrong side of the road, colliding with two cars,
a van and a truck. A massive blaze broke out and a driver of
nearby vehicle tried to put out the blaze with a fire extinguisher.
The truck
driver jumped out of the wreck physically unharmed but
badly shakenafter the horrific crash. The driver reportedly tried to
escape from the scene,
but was later detained by authorities. Ten
people were rushed to hospital, some in a serious condition. There
were three underage people among the injured, two with serious
brain injuries and one with a broken hip.

A camera in a car travelling in the opposite direction recorded the entire
incident.

Video – epda
I really hope so

Video – epda
No because the hours you work p/w are to long usually over 60 hrs and for the money that's on offer a person on average earns €10 p/h and because the hours are so long it leads to lots off problems including stress,quality of life and health

Video – epda
I think that the job of HGV driver is a good one if its paid by the hour and the operator keeps within the working tine and drivers hours regulations. There are some very well paid driving jobs. Well paid jobs will always require specialist training such as car transport, chemical pumping etc. Employers are aware of the cost of training and retaining drivers and therefore will pay a higher rate than other employers. Own account operators to pay more that licenced haulage contractors. When selecting a company to work for it is always preferable to work for a company that have an experienced transport management who have actual hands on experience of the role of the driver within their own company. After 10 years of low wages the pendulum is swinging in favour of the driver. The Driver CPC and the increase in enforcement of drivers hours, tachograph and vehicle roadworthiness regulations are all benifiting the role of the professional driver.