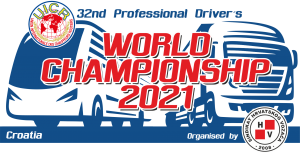 It’s a pleasant 28 degrees in Zagreb. World Professional Championship Teams should be making their final adjustments to their world tile challenge. On Thursday competing teams would have arrived from all over the globe, by planes, trains and automobiles. Competitors would test out the trucks, coaches and vans which would be used in the competition and would have had a chance to walk the course, meet up with friends and colleagues over dinner. Friday would start with competition preparations with teams having discussions about the test track and competition strategies. 2020 had over twenty-three countries registered to compete. It was looking like it was going to be one of the best events to be held in many years. The host county Croatia had an excellent team on the ground headed up by Miljenko Gočin of the Croatian Drivers Union. Miljenko, did a fantastic job in organising the event. Along with the support of the UICR, this year’s event was going to have additional driver challenges built into the three competition days. Alas Covid struck the event and the World Professional Driver Championship 2020 had to be cancelled, for only the second time in its eighty year history.

As always, the World Professional Driver Championships is a show case of the very highest standards of professional driving. It is also a weekend of fierce competition and celebration of both driver skills and friendships, where everyone is a winner.
With the event fully booked out for the competition weekend we can only lament on what could have been. On the positive side we will all look forward to competing in the rescheduled event in Croatia August 2021.

Sunshine in Zagreb and Not a Driver to be Seen
Hi, any bus/coach drivers in this group. Would love some advise for someone starting out as a bus/coach driver. Test coming up in a few weeks.

Sunshine in Zagreb and Not a Driver to be Seen
No because the hours you work p/w are to long usually over 60 hrs and for the money that's on offer a person on average earns €10 p/h and because the hours are so long it leads to lots off problems including stress,quality of life and health

Sunshine in Zagreb and Not a Driver to be Seen
I think that the job of HGV driver is a good one if its paid by the hour and the operator keeps within the working tine and drivers hours regulations. There are some very well paid driving jobs. Well paid jobs will always require specialist training such as car transport, chemical pumping etc. Employers are aware of the cost of training and retaining drivers and therefore will pay a higher rate than other employers. Own account operators to pay more that licenced haulage contractors. When selecting a company to work for it is always preferable to work for a company that have an experienced transport management who have actual hands on experience of the role of the driver within their own company. After 10 years of low wages the pendulum is swinging in favour of the driver. The Driver CPC and the increase in enforcement of drivers hours, tachograph and vehicle roadworthiness regulations are all benifiting the role of the professional driver.