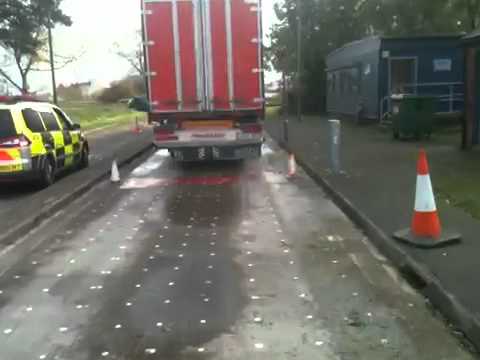 Today is the start of a new enforcement policy on ‘Drivers Hours’ offences in the UK by the Driver & Vehicle Standards Agency (DVSA). The new regulation allows for fixed penalty charges to be applied for current offences and for offences committed in the past 28 days whether committed in the UK or in another member state.

In a single roadside check, DVSA traffic examiners will be able to issue fines for up to 5 drivers’ hours offences. It means a driver could be fined up to £1,500 in a single check if he/she consistently broken the rules.

It won’t matter if the offences took place in Great Britain or elsewhere.

The rules will also apply to drivers who don’t live in Great Britain. However, they’ll need to pay any fines immediately, before being allowed to continue their journey. DVSA will immobilise their vehicle until they pay.

However this fixed penalty charge is not in Northern Ireland (NI). In NI the Driver & Vehicle Agency (DVA) can prosecute for current and previous offences only by way of a Court appearance. An officer will look for a Fixed Penalty Deposit of Stg 300 for each offence up to a maximum on Stg. 900. This is treated as a court deposit which must be paid prior to leaving NI. If the driver is found not guilty of offences the monies will be returned.

It is important that any drivers transiting or delivering in NI are aware of the offence and ensure that they make any infringements known to their Transport support staff. A number of infringements that drivers can be prosecuted for, are due to the driver not knowing how to correctly record certain activities, because of which automatically become infringements.

FPC Drivers Hours UK – epda
Hi, any bus/coach drivers in this group. Would love some advise for someone starting out as a bus/coach driver. Test coming up in a few weeks.

FPC Drivers Hours UK – epda
No because the hours you work p/w are to long usually over 60 hrs and for the money that's on offer a person on average earns €10 p/h and because the hours are so long it leads to lots off problems including stress,quality of life and health

FPC Drivers Hours UK – epda
I think that the job of HGV driver is a good one if its paid by the hour and the operator keeps within the working tine and drivers hours regulations. There are some very well paid driving jobs. Well paid jobs will always require specialist training such as car transport, chemical pumping etc. Employers are aware of the cost of training and retaining drivers and therefore will pay a higher rate than other employers. Own account operators to pay more that licenced haulage contractors. When selecting a company to work for it is always preferable to work for a company that have an experienced transport management who have actual hands on experience of the role of the driver within their own company. After 10 years of low wages the pendulum is swinging in favour of the driver. The Driver CPC and the increase in enforcement of drivers hours, tachograph and vehicle roadworthiness regulations are all benifiting the role of the professional driver.