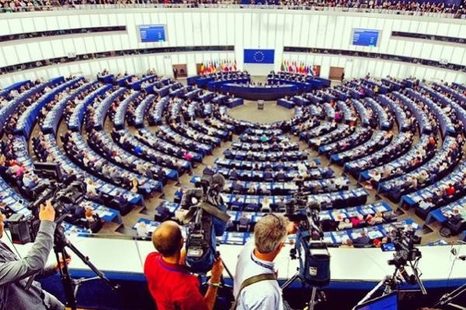 MEPs in the European Parliament Transport Committee have voted against road safety and quality jobs for Europe’s 3 million professional drivers. The Committee’s amendments to the EU Mobility package would confirm the exclusion of road workers from the new EU Directive on Posted Workers – denying drivers the right to fair pay when working across borders. They would also mean less rest every month, with employers able to keep drivers on the road for three weeks with no more than 24 hours’ rest. The risk of fatigue-related accidents is clear.

These decisions override an earlier package of votes at the Employment Committee, which supported the demands of workers and their unions. However, the full European Parliament plenary still has to vote on the final report, and member states in the Council have not yet reached a joint position.
Roberto Parrillo, President of the ETF Road Section, was scathing about MEPs’ decision to exclude drivers from the fair pay principle of the new Posted Workers’ Directive. “The European Union has recently been congratulating itself for guaranteeing workers who are sent to another country the same pay as local employees for the same work. Why on earth do road transport workers not deserve the same equality? A permanent exclusion for road transport from posting rules is a vote to legalise social dumping and wage discrimination in Europe. An EU that claims to be building a ‘Social Pillar’ cannot impose this treatment on European workers.”

Frank Moreels, ETF President, expressed huge frustration at the decision to reduce drivers’ rest time. “The next European elections are getting close, and the EU faces a wave of Eurosceptic populism. At this moment MEPs have chosen the demands of business over the quality of jobs and the safety of road users. If this decision stands, professional drivers will have less rest per month, with longer periods away from home. That means more tired drivers, and we know that fatigue on the road kills. How does this inspire faith in the European project? We will fight this short-sighted decision all the way, but today is a bitter blow.”

Eduardo Chagas, ETF General Secretary, highlighted the backward step on sleeping in vehicles. “It is shocking that MEPs have voted to overturn a recent ECJ ruling against drivers spending their long breaks in their vehicle. Drivers now face many more weekends spent in lorry and coach parks far from home, cooking on the road or in their cabins. You cannot build a social Europe on such exploitation and poor conditions.”
(source: www.ETF-EUROPE.org)

European Parliament Transport Committee votes for the mobility package – epda
Hi, any bus/coach drivers in this group. Would love some advise for someone starting out as a bus/coach driver. Test coming up in a few weeks.

European Parliament Transport Committee votes for the mobility package – epda
No because the hours you work p/w are to long usually over 60 hrs and for the money that's on offer a person on average earns €10 p/h and because the hours are so long it leads to lots off problems including stress,quality of life and health

European Parliament Transport Committee votes for the mobility package – epda
I think that the job of HGV driver is a good one if its paid by the hour and the operator keeps within the working tine and drivers hours regulations. There are some very well paid driving jobs. Well paid jobs will always require specialist training such as car transport, chemical pumping etc. Employers are aware of the cost of training and retaining drivers and therefore will pay a higher rate than other employers. Own account operators to pay more that licenced haulage contractors. When selecting a company to work for it is always preferable to work for a company that have an experienced transport management who have actual hands on experience of the role of the driver within their own company. After 10 years of low wages the pendulum is swinging in favour of the driver. The Driver CPC and the increase in enforcement of drivers hours, tachograph and vehicle roadworthiness regulations are all benifiting the role of the professional driver.