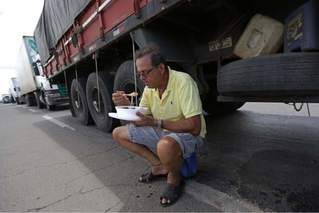 The European Commission is currently evaluating the measures with the view to include in the upcoming Road Initiative, a legislative package supposed to be launched in only 2 months.

The message of the ETF delegation, coach drivers and trade union representatives from Belgium, Spain and Denmark, was clear: drivers cannot work or drive longer hours and rest for less without becoming a real and unwilling threat for their own safety, for the safety of their passengers, for the safety of other road users. ETF union officials called the bundle of measures ‘a way to legalise social dumping’ and pointed out to the fact that the sector will become even less attractive for young people.

Despite two years of DG MOVE promises for a strong social pillar of the initiative, meant to address the critical social and labour situation in trucking and passenger sectors, the ETF has recently come across what is supposed to be the content of the initiative:

1. Reduction of the total weekly rest over a period of 3 or 4 consecutive weeks,
2. The increase in driving time,
3. Denial of the drivers’ right to minimum wage for 5 to 9 days of work per month,
4. The increase in the number of consecutive days of driving in passenger transport before the driver can take a full day of rest, All these       are attempts to weaken the quality of the driver’s job, the road safety and the safety of passengers.

Today starts a two-month ETF campaign for a social road initiative, to be published by the European Commission on 31 May.
“At our first meeting with Commissioner Bulc the ETF was asked to come up with concrete, constructive proposals to address the social dumping and unfair competition that dominate the sector. We have put every effort in, and came up with two sets of proposals in 2015 on law enforcement and in 2016 on cabotage and access to occupation. None of these have been taken into account by the European Commission. We’ll pass to action!” said Roberto Parrillo, ETF Road Transport Section President.

The ETF affiliates have already started massive information campaigns among their members. In the weeks to come, they will have the opportunity to express their views before the European Commission via social media campaigns and physical actions. The peak of the campaign: the ETF European demonstration on 26 April and the week of action on passenger transport.

​Next week, trade unions across Europe will meet in Warsaw to sign a declaration against attempts to legalise social dumping in road transport.

ETF Commission Review – epda
Hi, any bus/coach drivers in this group. Would love some advise for someone starting out as a bus/coach driver. Test coming up in a few weeks.

ETF Commission Review – epda
No because the hours you work p/w are to long usually over 60 hrs and for the money that's on offer a person on average earns €10 p/h and because the hours are so long it leads to lots off problems including stress,quality of life and health

ETF Commission Review – epda
I think that the job of HGV driver is a good one if its paid by the hour and the operator keeps within the working tine and drivers hours regulations. There are some very well paid driving jobs. Well paid jobs will always require specialist training such as car transport, chemical pumping etc. Employers are aware of the cost of training and retaining drivers and therefore will pay a higher rate than other employers. Own account operators to pay more that licenced haulage contractors. When selecting a company to work for it is always preferable to work for a company that have an experienced transport management who have actual hands on experience of the role of the driver within their own company. After 10 years of low wages the pendulum is swinging in favour of the driver. The Driver CPC and the increase in enforcement of drivers hours, tachograph and vehicle roadworthiness regulations are all benifiting the role of the professional driver.