DVSA gains power to fine on the spot for previous offences 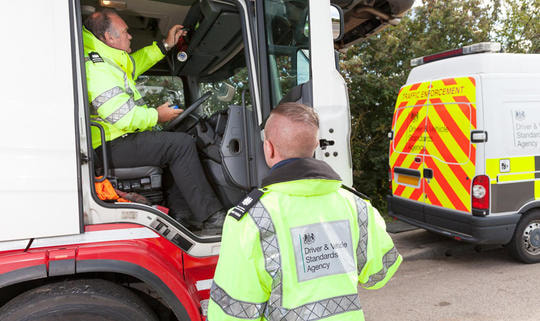 The DVSA can issue fixed penalties for offences that took place in the previous 28 days, as of today (1 February).

The offences covered include drivers hours offences and any breaches to the weekly rest rules.
Examiners are able to issue on-the-spot fines of £300 for up to five drivers’ hours offences in the previous 28 day period. This means that any one driver could face a total fine of £1,500 for historical offences.

The potential fines will apply to both UK and foreign HGV drivers and will cover offences committed both at home and abroad.

Non-UK drivers must pay their fine before continuing their journey and will have their vehicle immobilised until they pay.

The DVSA will also issue a £300 fine to drivers who spend their weekly rest in their cab in places where it causes an issue, such as a lay-by or residential area.

The agency said that spending weekly rests in their cab can contribute to drivers not taking a proper break and can expose them to poor living conditions.
In some areas residents have complained about noise, litter and anti-social behaviour.

DVSA chief executive, Gareth Llewellyn said that the tougher fines will help the agency to take firmer action against drivers who break the rules. He said: “There is no excuse for driving while tired. The results of falling asleep at the wheel of a 40 tonne lorry can be devastating to families and communities. Any drivers breaking these rules are putting other road users at risk.”

The FTA welcomed the measure of taking action against non-UK HGV drivers who might have committed a string of offences in the days before a vehicle is stopped. Although the new powers come into force today, the DVSA will not begin actively enforcing them until March to allow time for a full 28 day liable period to build up.

DVSA gains power to fine on the spot for previous offences – epda
Hi, any bus/coach drivers in this group. Would love some advise for someone starting out as a bus/coach driver. Test coming up in a few weeks.

DVSA gains power to fine on the spot for previous offences – epda
No because the hours you work p/w are to long usually over 60 hrs and for the money that's on offer a person on average earns €10 p/h and because the hours are so long it leads to lots off problems including stress,quality of life and health

DVSA gains power to fine on the spot for previous offences – epda
I think that the job of HGV driver is a good one if its paid by the hour and the operator keeps within the working tine and drivers hours regulations. There are some very well paid driving jobs. Well paid jobs will always require specialist training such as car transport, chemical pumping etc. Employers are aware of the cost of training and retaining drivers and therefore will pay a higher rate than other employers. Own account operators to pay more that licenced haulage contractors. When selecting a company to work for it is always preferable to work for a company that have an experienced transport management who have actual hands on experience of the role of the driver within their own company. After 10 years of low wages the pendulum is swinging in favour of the driver. The Driver CPC and the increase in enforcement of drivers hours, tachograph and vehicle roadworthiness regulations are all benifiting the role of the professional driver.