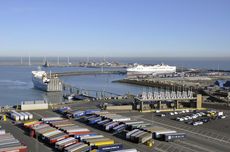 112 Slovak trucks confiscated in action against social dumping in Zeebrugge

In a coordinated action against social dumping no less than 112 Slovakian tractors were seized on a business park in Zeebrugge. This is what Filiep De Ketelaere reports of the labor lawyer Gent, West Flanders department.

The Federal Judicial Police for West Flanders and the social inspection services have invaded North Sea Express (NSE) yesterday (20 Nov 2017). The company relies on the Slovak East Transport Leasing (ETL) subcontractor for transport assignments. Especially Romanian drivers work at ETL. During the raid, the offices of NSE were also searched.

The Romanian truckers present were interviewed by the researchers. “It became clear that the drivers did not agree with their working conditions and demanded urgent intervention”, according to labor minister Filiep De Ketelaere. The drivers also denounced their living conditions. Other ETL lorry drivers were notified via their on-board computer yesterday morning that they were not allowed to come to NSE parking during the event.

The action examined whether the Slovakian subcontractor and its client are guilty of social dumping. This means that the companies in question may systematically circumvent their social-law obligations in Belgium. “This creates unfair competition with companies that do comply with the rules,” De Ketelaere explains.
The West Flemish department of the labor lawyer Gent will conduct further research into the case.

Slovak Trucks Confiscated – epda
Hi, any bus/coach drivers in this group. Would love some advise for someone starting out as a bus/coach driver. Test coming up in a few weeks.

Slovak Trucks Confiscated – epda
No because the hours you work p/w are to long usually over 60 hrs and for the money that's on offer a person on average earns €10 p/h and because the hours are so long it leads to lots off problems including stress,quality of life and health

Slovak Trucks Confiscated – epda
I think that the job of HGV driver is a good one if its paid by the hour and the operator keeps within the working tine and drivers hours regulations. There are some very well paid driving jobs. Well paid jobs will always require specialist training such as car transport, chemical pumping etc. Employers are aware of the cost of training and retaining drivers and therefore will pay a higher rate than other employers. Own account operators to pay more that licenced haulage contractors. When selecting a company to work for it is always preferable to work for a company that have an experienced transport management who have actual hands on experience of the role of the driver within their own company. After 10 years of low wages the pendulum is swinging in favour of the driver. The Driver CPC and the increase in enforcement of drivers hours, tachograph and vehicle roadworthiness regulations are all benifiting the role of the professional driver.