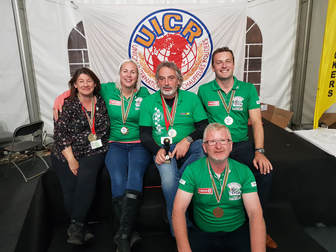 If only they didn’t cancel the World Professional Driver Championships, Team Ireland would be making their final adjustments to their world title challenge. On Thursday Teams would have arrived from all over the globe, by planes, trains and automobiles. Competitors would have had an opportunity to view the trucks, coaches and vans that would be used in the competition and would have had a chance to meet with friends and colleagues over dinner. Friday would start with competition preparations with teams having discussions about the test track and would get an opportunity to test driving the competition vehicles.

2020 had over twenty-three countries registered to compete. It was looking like it was going to be one of the best events to be held in many years. The host county Croatia had an excellent team on the ground headed up by Miljenko Gočin of the Croatian Drivers Union. Miljenko, did a fantastic job in organising the event. Along with the support of the UICR, this year’s event was going to have additional driver challenges built into the three competition days.

As always, the World Professional Driver Championships is a showcase of the very highest standards of professional driving. It is also a weekend of fierce competition and a celebration of both driver skills and friendships, where everyone is a winner.

With the event fully booked out for the competition weekend, we can only lament on what could have been and look forward to competing in the rescheduled event in August 2021.