Caffeine May Cause Sleepiness In Truck Drivers 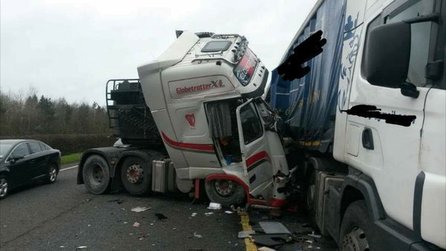 It is interesting to note from the results of the research that;

Caution is needed if recommending caffeine to manage driver sleepiness.

High caffeine use is associated with poorer health and does not reduce crashes.
Truck drivers are vulnerable to driver sleepiness due to pressures of shift work and prolonged driving hours; this is a safety concern as sleepiness more than doubles crash risk. Caffeine is a commonly used countermeasure to driver sleepiness. Previous research with truck drivers has demonstrated a positive impact of caffeine consumption on crash risk. However, habitual use of caffeine has the potential to impair nighttime sleep resulting in increased sleepiness and safety risk. One group that may be particularly vulnerable to the potential negative impacts of high caffeine consumption are those truck drivers who consume more than 5 caffeinated drinks per day.

Caffeine is an effective countermeasure to driver sleepiness, however, high caffeine consumers do not exhibit any benefit to driving safety indicators. In fact, there is some evidence for safety concern because high caffeine consumers self-report more crashes and worse driving safety indicators than low caffeine consumers. High caffeine consumption was associated with poor health behaviours. Further research is needed to fully understand the implications of high caffeine use. Interventions aiming to reduce truck driver sleepiness should be cautious in promotion of caffeine in isolation; a wholistic approach to improve driver health would likely be more effective than focusing on sleep health alone.
The EPDA have been driving home the message that quality sleep is essential to a healthy body and mind. To get quality sleep, drivers must avoid using stimulants and eating a large meal before sleeping. Regular daily exercise is important to ensure that your body functions as it should. For some driving roles, it is easy to get your daily exercise in. For some driving jobs, drivers will have to take time out to exercise.