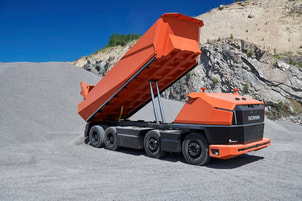 The EPDA have appointed a team to work on the impact of technology on the role of the professional driver. Connected and automated vehicles are being integrated into the transport sector and with that change comes opportunity. Over the coming months we will look at all of the aspects of connected and automated vehicles. Our team headed up by EPDA Executive member Joe Doyle will examine and report on developments.

Connected & Automated Driving, Where to from Here?

This is a question that is on the minds of many in the road transport sector. The technology is already here. Many of the large manufacturers have vehicles running autonomously.  Scania and Volvo have been demonstrating their driver-less vehicles operating in terminal yards and mines. While the term driver-less vehicle may drive some to search for a new career, the role of the professional driver is not alone safe for the foreseeable future but it will become a much sought after profession.  Since the introduction of advanced computerised in vehicle technology, the road transport industry has seen the introduction of very innovative software systems, designed to make driving safer, more efficient and more environmentally friendly. 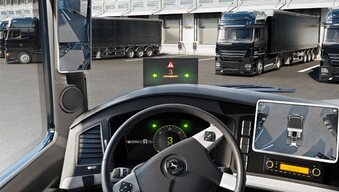 Advanced Camera and heads up display

One of the early advancements, that drivers do not readily admit to liking, was the automated gearbox. This piece of kit has reduced the need for drivers to take one hand off the wheel to change gear and to have to depress the clutch pedal hundreds of times per day.  However operating the automated gearbox to its full potential requires a level of knowledge that most drivers simply do not have. Another benefit to drivers is the adaptive cruise control. A very useful tool which reduces driver fatigue, by simply taking a lot of the stress out of driving on public roads. Again most drivers in our research do not know how it works or how to use it to their benefit.

Daimler Benz ceased its trail on vehicle platooning in January of this year. On paper it was predicted a 7% fuel saving could be made however when trialed in real world driving they were looking at a 1% which led Daimler Benz to halt the trial as there was no real commercial value to platooning. The Transport Research Laboratory (TRL) in the UK are starting a platooning trail this November with DAF trucks. Is is possible that UK drivers will make way for what is essentially a train operating on a motorway instead of a railway line. Many of our readers have already questioned the thinking behind Platooning, it signifies the lack of understanding of the role of the commercial vehicle driver. 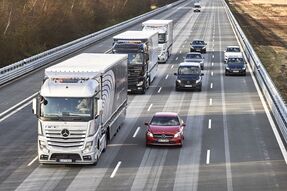 Not all driving jobs require the same skill sets.  Many of the new driving jobs require some form of additional skills besides the ability to drive a HGV. As firms  focus on maximising returns on assets , more responsibility is being placed on the driver to deliver a higher level of service. For some drivers,  driving only accounts for 40% of their working time, the remaining time will be used to handle goods or provide addition customer services. The role of the driver is changing. Technology will play a significant part in redefining this very important role.

A key aspect to the role is of course road safety and the well-being of the driver. A notable piece of legislation , Drivers Hours, was put in place to ensure the safety of road users, the well being of the driver and ensure fair competition among transport undertakings.  To support the commercial driver the EU introduced the Driver CPC to ensure that all drivers where provided with continual professional development training. Now technology is being deployed to reduce the stresses placed on the driving aspect of the role. Drivers will now be able to play a more significant part in the logistics and transport sector. Career paths are opening up to drivers which were once out of the reach of drivers.

The EPDA are taking part in an EU funded programme designed to evaluate the impact of connected and automated vehicles on the transport industry, The workshops will be looking at the role the driver will play and the training requirements needed to meet this new era of transport. We will look forward reporting on the work of EPDA’s Joe Doyle and his team on this project.